An article in the Topeka State Journal published Jan. 27, 1941, described how two professors, Dwight Bolinger of Washburn College and Mario Sancho of the Colegio San Luis in Cartago, Costa Rica, would be exchanging positions, “with Bolinger teaching Sancho’s classes at the Central American college, and the Costa Rican taking the Topekan’s position as a member of the department of modern languages at Washburn.  With his family, Professor Bolinger will sail from New Orleans February 12 for a year’s stay in Costa Rica.  At the College of San Luis, he will teach Spanish literature and perhaps some courses in English.  The Bolingers will occupy the Sancho home in Cartago and the Sanchos the Bolinger home at 1201 High.”

“The exchange professorship, worked out by Professor Bolinger thru correspondence with Sancho and the minister of public education of Costa Rica, is probably the first of its kind in this part of the country which is independent of any educational or governmental organization.”

“‘We’re looking ahead eagerly to our year in Costa Rica,’ Professor Bolinger said.  ‘For several years I’ve been on the panel of the state department for an exchange professorship in Latin America, but the preferences have usually been given to teachers in the scientific or professional fields.'”

“Cartago, where the Bolingers will live and where 4-year-old Clyde will attend kindergarten, is a small college town of about 9,000 population, and the former capital of Costa Rica.  It is situated a short distance from the present capital, San Jose.”

The Washburn Review of Jan. 10, 1941, provides additional information.  Describing the family’s plans, it states that the family “will stop at Havana and Puerto Limon, and go from there to Cartago, 5,000 feet above sea level, with a climate of perpetual spring.”  Referring to Mario Sancho, with whom Dwight was trading jobs, the article notes that Sancho “is a well known writer and teacher in his country.  He served as consul at Boston for ten years, was Charge d’Affaires in Mexico for the Costa Rican government.  He taught at Brown university and did his graduate work at Harvard university.”  According to another newspaper, name unknown, in an article published on Feb. 12, 1941, Mrs. Sancho was an American whom he met during his period as Boston consul.

In an interview after returning to the U.S. (Washburn Review, Feb. 6, 1942), Dwight described the Costa Ricans’ enthusiasm for sports.  “The Costa Rican president dismissed all of the nation’s schools when an important football game was played there.  The football they play is similar to American soccer.  Bicycle racing is one of their most highly developed sports.”  “I expected to find a country of lush forests with about one person per square mile.  Instead it was located on a central plateau high in the mountains with the people in about the expected ratio but crowded into one spot.”  Noting that Costa Ricans claim to have a peaceful country,  instead, he said, they are “a restless, noisy people who are far from peaceful.  Because the towns are built close together after the nature of Spanish towns, you can hear all the noise of the neighbors and of the street.  At all hours of night people walk down the streets and, in passing your house, run their canes down the clapboarding.”  The Sancho home, where the Bolingers were staying, had the disadvantage of being on the main street close to the bus station.

In Costa Rica, he noted, “the people hold celebrations the year round.  Greatest of these is the Festival of Holy Week.  During that week, the men dress as Roman soldiers and parade thru the streets.  An image of Christ bearing the heavy cross is carried thru the streets accompanied by a group of people representing the Jews.”

During the time Dwight was teaching at the University of Costa Rica in 1941, he recognized a need at the university for a decent single-volume English-language dictionary.  Consequently, he arranged with The Merriam Company of Springfield, Massachusetts to donate a copy of their Webster’s New International Dictionary, published that same year.  Containing 3,350 pages, 12,000 words, and 600,000 entries, the donation drew the attention of the local newspaper. 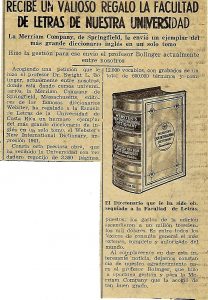 Dwight’s time in Costa Rica was memorable, so much to that in 1989 he, his son Bruce, and daughter-in-law Charlotte paid a visit to the country.  It had been 48 years since Dwight was last there.  During their time there they visited the school where Dwight taught, the house where they lived, and visited one of his former students.  The following letter was written by Dwight to June, a family friend, during the visit to Costa Rica.  Following the letter are several photos from their 1989 trip.

We chugged into this isolated dot on the map just thirty minutes ago—two hours late because of engine trouble on the launch that threaded its way up here through hyacinth lagoons on the canal that parallels, more or less, the sea and makes contact with it three times along its forty mile course (actually much longer because one can continue all the way to Lake Nicaragua).  Supper is in fifteen minutes, just time enough for me to start a letter.  I should add that we – Charlotte, Bruce, and I – are on our twelfth day of a trip meticulously planned by Bruce, in which there has scarcely been a hitch this far.  First it was a few days in San Jose to get our bearings, visit a museum or two, do some business (Bruce had – I refer to inner compulsion – to talk with the Costa Rican official in charge of elections, to compare goings on here with those in Nevada County), make or remake some acquaintances (including students of mine from 1941), do some shopping (I was determined to buy a couple of things I remembered from back then, such as a gofio made of ground parched corn mixed with sugar – poor man’s treat – no success yet), and try out the low-priced restaurants called sodas that serve the native fare (such things as gallo pinto, consisting of black beans and fried rice which a choice of egg or meat, or Casado, the same plus potato and salad, so called – we were told – because such a dish is right for a married man).  Then a trip to Poás volcano, which was covered with such a dense fog that we were not able to see anything, though the trip rewarded us with a stop at a little town called Grecia which sports an all-metal church that Costa Rica got free by mistake.  A Belgian firm prefabricated a church and a public building in the past century (my guess was that this was a byproduct of the armor-plating of warships at the time) on orders from Puntarenas, Chile, and the cargo was accidentally discharged at Puntarenas, Costa Rica instead.  It was cheaper for the supplier to send a second shipment, so Costa Rica got the two buildings free.

So far I’ve made contact with four or five of my students and we were taken to dinner by one who is now an ophthalmologist and whom I helped get a scholarship for his medical training years ago.  The others – some of them – I have seen, but Bruce’s schedule has not permitted visits.  I expect to follow up on that next week, when I’m here (for the last few days) alone – they are going on to see Tikal, and we plan to meet in Guatemala City for the return home.

After a diligent search – some people said the place still existed, others that it was no longer there – we finally found the house where Louise and Bruce and I lived in 1941.  It was deceptive because the room that had been Bruce’s is now a shoe shop.  But with a little persuasion on the part of a new-found friend (an official of the school whose mother-in-law turned out to be one of my students) the current occupant let us in and I could confirm that it was indeed the place – same tile floors, same mahogany pillars and staircase, same lofty ceiling with its corrugated tin room that did a complete percussion section every time it rained.

The last couple of days we were at a beach resort on the Pacific side, one of the state parks, and tonight and a couple of days more we are at another state park on the Caribbean side.  These are sizable areas the Costa Rican government has set aside in an effort to save plant and animal life.

Great luck so far with weather.  This part of the year it is supposed to rain about all the time, but actually only one real storm has occurred, just as we got back from a hike that would have found us sloshing in the mud had the rain occurred earlier.  It was just enough to give us a taste of the real thing.

It’s been a long day and I’m ready for bed.